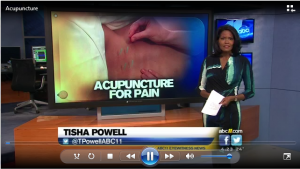 Raleigh, NC – North Carolina’s Association of Acupuncture and Oriental Medicine decided to pilot a small outreach project to heighten awareness about acupuncture in the Raleigh- Durham market, but the impact spread much farther than expected.

After placing a public service announcement in the state’s major daily newspaper, the News & Observer, on National Acupuncture day, efforts focused on engaging local media to cover acupuncture’s benefits to get the largest impact at minimal cost.

The outreach effort focused on two existing news cycles – the National Institutes of Health’s research on acupuncture’s efficacy to treat chemotherapy and radiation side effects and the Center for Disease Controls declaration of national epidemic of deaths due to opiate overdoses – to increase its chances of success.

WTVD, the local ABC affiliate, shot this news segment with an NCAAOM chapter member explaining how acupuncture can reduce or replace the need for opiates to relieve chronic pain. The segment, which also included a client testimonial, aired in the 4, 5, 6 and 11 p.m. newscasts, allowing for widest viewer exposure.

One month later, That Cancer Show, a local two-state radio network show, hosted a guest speaker from NCAAOM to discuss the latest research. As you can hear, the show also included a client testimonial and offered listeners the chance to call in to ask questions.

State chapter members increased their outreach effort’s impact by inviting their membership to use prepared messages on their websites and Facebook pages. The first messages promoted the chance to tune in live; afterwards, messages included links to both the video news segment and the radio podcast.

Congratulations to North Carolina for getting broad coverage on two important topics for a minimal investment.