According to the newest report gleaned from the 2007 National Health Interview Survey (NHIS) conducted by the National Center for Complementary and Alternative Medicine (NCCAM) and the Center for Disease Control’s National Center for Health Statistics, adults in the United States spent $33.9 billion out-of-pocket on visits to complementary and alternative medicine (CAM) practitioners and purchases of CAM products, classes, and materials for self-care. Nearly one-third of this out-of-pocket spending was to pay for CAM practitioner costs (see figure below.) Further, according to this government survey, the number of visits to acupuncturists rose 32% between 2002 and 2007. Also, nearly 12% of the out-of-pocket money was specifically spent on yoga, Tai chi and Qi gong for self-care (see figure below). 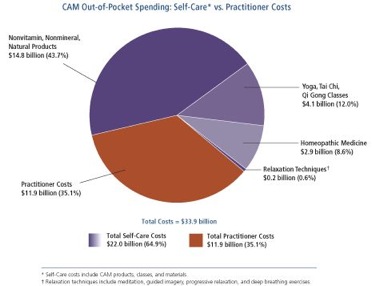 In addition, the NHIS survey analysis revealed that “the increase in consumer growth in acupuncture (along with massage therapy and naturopathy) may in part be due to the greater number of states that license these practices and a corresponding increase in the number of licensed practitioners between 2002 and 2007. This same time period has also seen large numbers of articles in the lay press extolling the benefits of these therapies, increasing awareness of them in the general population.” Together, increased opportunity and increased awareness may explain much of the observed increase in adult use of the above therapies.

“This survey represents a remarkable finding for the profession of acupuncture and Oriental medicine as it attributes consumer growth to recent efforts to increase recognition of acupuncture with state regulators as well as a the successful implementation of the media and public relations campaign to promote acupuncture and Oriental medicine,” stated NCCAOM Chief Executive Officer Kory Ward-Cook. “We are very pleased to see this progress has made a direct impact on the growth of the profession.”

To read more about these significant findings on increase use of acupuncture, Tai chi, and Qi gong, please go to the link below, which provides access to the newly released National Health Statistics Reports (NHSR), (Number 18, July 30, 2009) as well as the earlier, NHSR (Number 12, December 10, 2008).

“The mission of the NCCAOM is to establish, assess, and promote recognized standards of competence and safety in acupuncture and Oriental medicine for the protection and benefit of the public.”